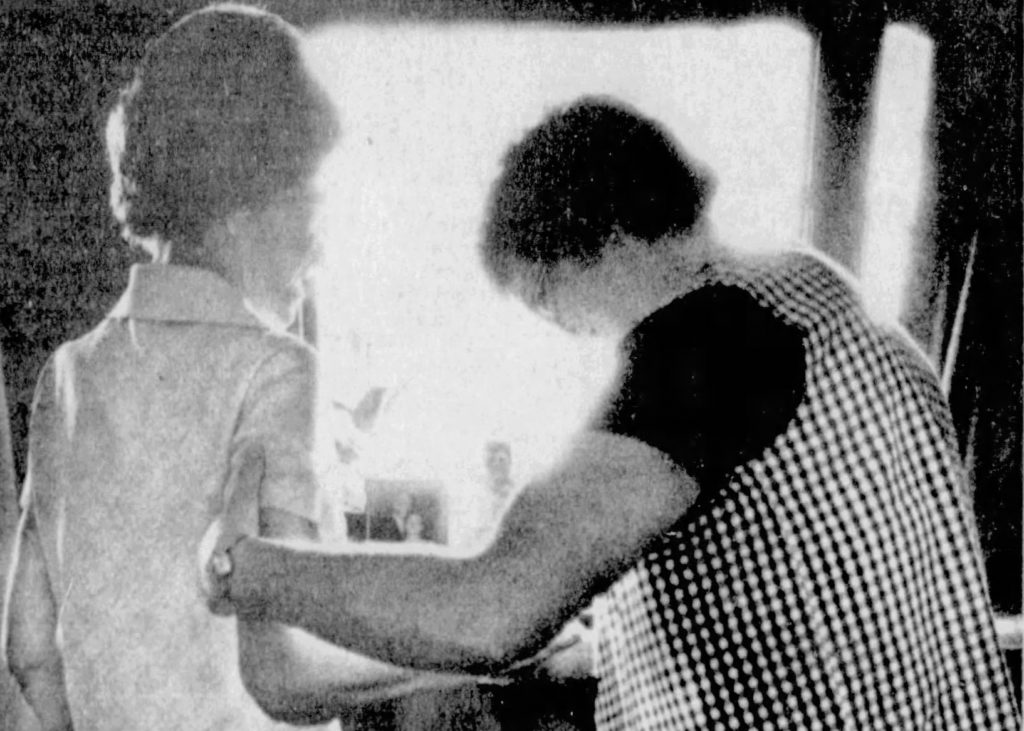 45 years ago this month, founder Lorraine Berndt incorporated Community Home Health to better serve the growing home health need in Cowlitz County. It would take one year for Community’s hospice program to be introduced, and another six for Community to open Longview’s very own hospice care facility. Dive into the article archive with us to get a taste of what Lorraine’s journey to opening Washington’s first hospice facility was like. As is the case with most new ideas, Lorraine’s vision brought about much debate and caused many to question what hospice care in America should look like in the future.

“Debate a matter of life, death, dignity” by Laurie Smith, The Daily News

A four-bed hospice center expected to open this May or June could become a godsend for some of the 130 Cowlitz County residents who die of cancer yearly.

Or — depending on which faction you ask — the experimental center proposed by Longview’s Community Home Health Agency could be a grievous mistake.

The debate is fraught with gut-level questions of life, death and human dignity. It is also shrouded in technicalities and heated by hospitals competing to fill empty beds.

At issue are plans for the first independent hospice center in the Northwest and the smallest of seven in the nation. In most American communities general hospitals control beds for hospice care.

Both the state Hospital Commission and Southwest Washington Health Systems Agency have endorsed the $230,00 project, saying it deserves a chance to prove itself a humane, economical way of caring for the hopelessly ill. The state Department of Social and Health Services probably will approve the preliminary plans by Feb. 2.

Moreover, the community has indicated it wants the facility by volunteering labor, low-interest loans and $100,000 for the project, says Lorraine Berndt, Home Health administrator.

All the same, her non-profit agency has its share of critics among doctors, hospital officials and nursing home operators. They fault the center’s design, believe a separate center would be wasteful and worry that Home Health officials wouldn’t try hard enough to save lives. 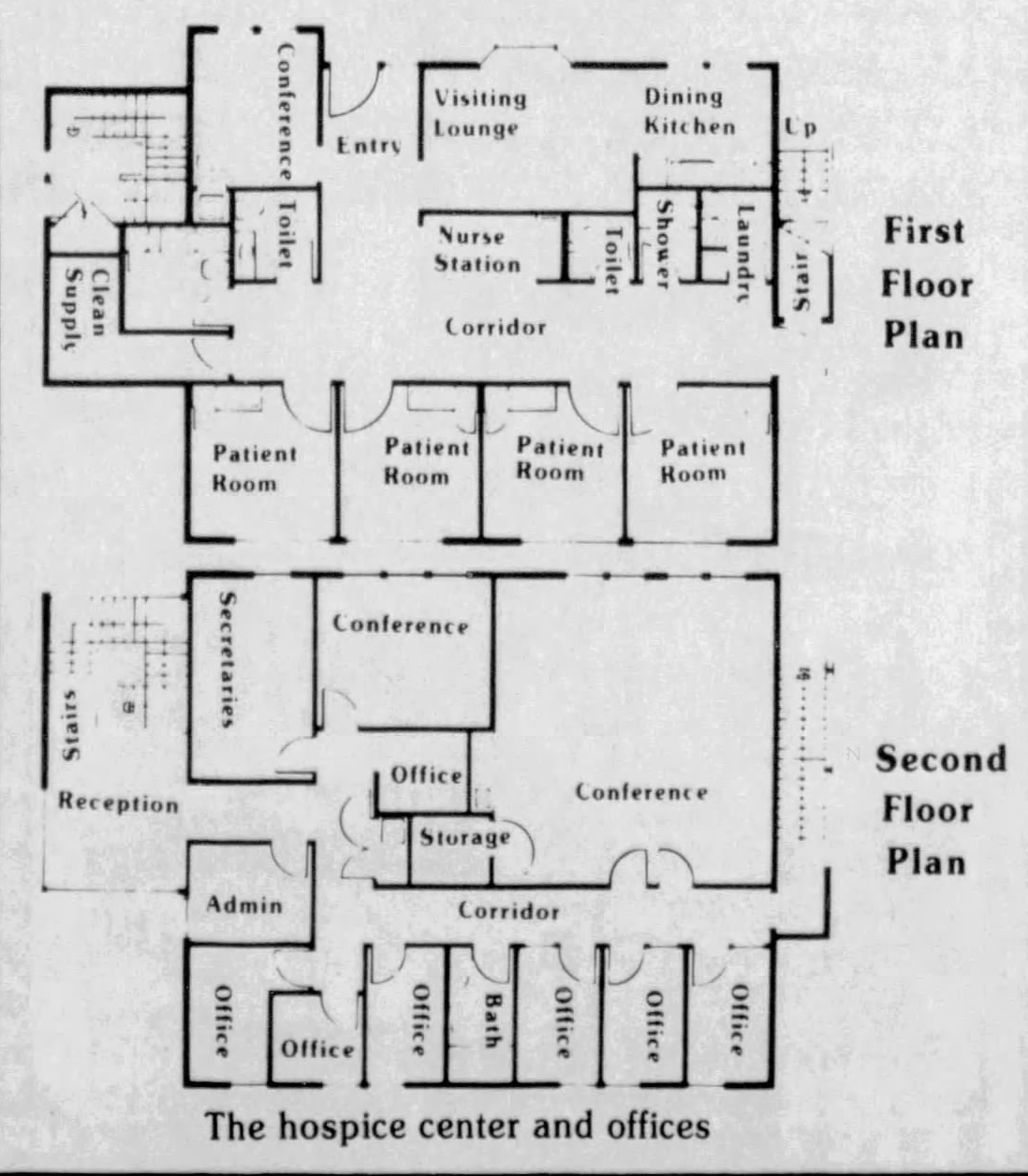 The two-story building would consist of a 2,400-square-foot hospice center downstairs and the same amount of office space upstairs for the agency’s inpatient and visiting nurse programs. Plans call for each of the four patient rooms to be 150 square feet; one or two bathrooms would serve all four.

A second entrance in each room, a glass patio door, would face a landscaped area and enable patients to keep dogs or cats. The center also would include a lounge, a small kitchen and dining area, and a conference room with tables and overstuffed chairs.

Home Health estimates the average patient cost at $162 a day, more than $46 in a nursing home and less than $263 in a hospital.

Drs. Richard Kirkpatrick and Steven Gorton, whose specialty is the No. 1 ailment among candidates for hospice, cancer, say dying patients shouldn’t have to leave home for a facility with too few toilets and claustrophobic rooms.

Their opinion matters because a hospice can’t survive without physicians’ support. Hospice can do nothing without their consent, and it depends on doctors for professional guidance and patient referrals.

Kirkpatrick considers the proposal “a hard sell for a mediocre product.”

However, hospice folks say the center would be an appealing choice for a patient who might otherwise die in a sterile third-floor hospital room, in a busy nursing home or alone in a one-room apartment on Commerce Avenue.

More important than the plumbing is the personal attention hospice provides to help the incurably ill “live as fully as possible until the moment of death,” says Claralee Williams, Home Health’s director of patient care.

Advocates say tender loving care and pain-relieving drugs given properly afford dying patients the peace and repose needed to reckon with ultimate issues — values, faith, love and the meaning of life itself.

“It is the chance to have your family there, to surround yourself with the things you want and need, to have your pets there or eat peanut butter sandwiches at midnight” if you want to, says Marty Lemke, executive director of Hospice of Greater Portland.

At the heart of hospice is respect for patients’ rights to comfort and self-determination, she said.

Forces of philosophy and emotion may underlie disputes about the floor plan.

A woman commenting at a public hearing on the hospice center warned, “These places have been called death houses,” suggesting spooky pre-mausoleums inhabited by cadaverous, narcoticized patients.

Practitioners say that hasn’t been the experience in their institutions.

Deeper tensions may result from doctors’ attitudes toward death. Physicians everywhere are torn at times between whether they should be curing or caring for their patients, says Gary Jacobsen, medical director of the Oregon Comprehensive Care Program and member of the National Hospice Association.

Many doctors “consider death a failure,” writes one hospice proponent. “It is a modern and ignorant prejudice.”

It is nonetheless a natural bias, Jacobsen says, because most of their patients want to get well.

And it’s not easy to known when to stop curing and begin helping a patient face death.

“There is nothing worse in medicine than to find out your patient could have been saved if he’d had the latest treatment,” says Kirkpatrick, who is less ready than others to diagnose patients as terminal and hand them over to hospice, Home Health officials say.

Hospice care is appropriate in some cases, he says, but Ms. Williams says, “He and our agency have never gotten along.”

“People who are beyond the stage of being helped by radiotherapy and who’ve already had their quota of chemotherapy — these people could be afforded some comfort” by the center, Norquist says. 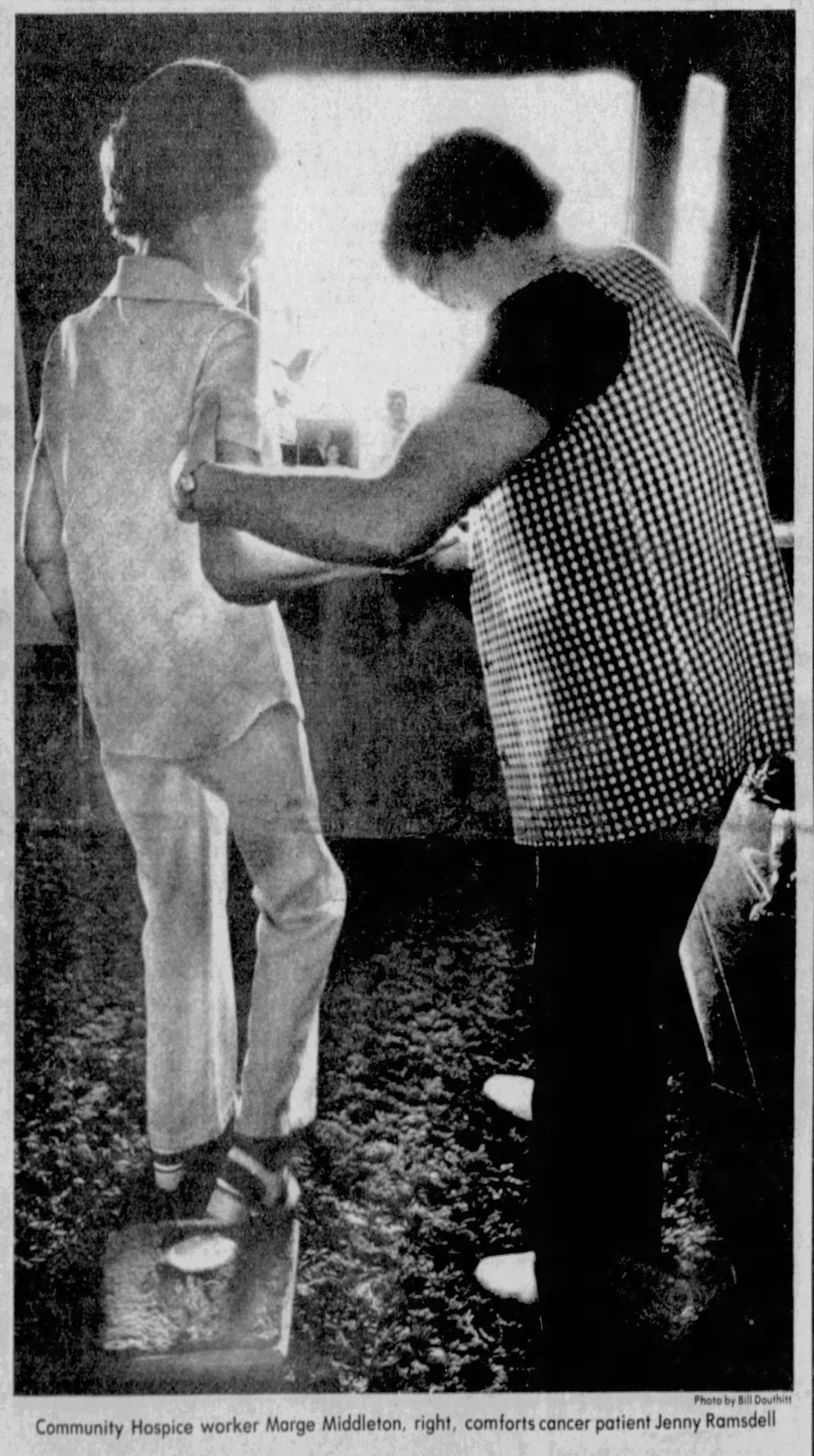 Sixty-two percent of local physicians polled in recent years supported some unspecified form of inpatient hospice for people who can’t die at home. Opinion is further split over whether that means hospice beds in a general hospital or the separate center is at issue here.

“This may sound cynical, but I think that debate has escalated as more hospital beds go empty,” says Ms. Lemke of Portland Hospice.

Bittner says a hospice “should be physically and symbolically separate — a place of peace and solitude and less concern for worldly things. I think of hospitals as places to go home from and carry on.”

Because hospital nurses are switched from floor to floor, they may be fighting for lives one week and attempting to help patients confront death the next, hospice folks say. Their nurses concentrate only on the demands of dying gracefully.

But opponents say patients are more likely to find what they need if hospice principles are applied in hospitals, because all medical care would be centralized and practiced with the same goals in mind, not rent by competing specialties.

“What grieves me the most about this hospice debate” is that a separate center “would fragment care” says Dr. Gorton, director of the St. John’s Hospital oncology unit.

The center also would duplicate resources, Gorton says, when the oncology unity already has beds, a homey lounge and allows visitors any time.

But the potential for harm goes beyond wasteful health care spending, opponents warn.

A St. John’s oncology nurse says the area “cannot afford to experiment at the expense of the dying and their families.”